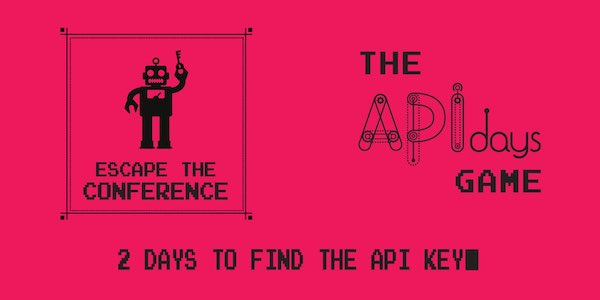 Escape the Conference was a game I designed and hosted during the last APIDAYS Paris 2018.

You can read the full story here.

APIDAYS is the world’s leading API Conference series, that gathers all types of profiles, tech and non-tech, during a 2-day event.

This event was the biggest ever organized and gathered more than 2500 attendees.

During the event, the organizers wanted to innovate with a game, so we created this game.

It was based on Escape Games, except that you had to break in instead of escaping a room. The concept was that attendees had to solve riddles to open a safe containing the “all the API knowledge”.

Riddles were dissimulated all over the venue, so to help them find these, I developed a digital maze as an Hypermedia API. This project was hugely inspired by Nicolas Grenie’s work on ApiBunny.

The riddles were all related to the API world but were designed to be solved by any attendee. Put together, the solution of the riddles formed a token to be validated thanks to the API.

In parallel, in the real world, I had a booth with a jar full (2000+), with only one opening the safe - that I had previously painted with UV paint. More than 700 people tried their chance to find the right key.

At the end, after validating the token, people had to solve a physical puzzle that, once opened, contained a UV lamp to find the right key.

Participants gave us great feedback that encouraged us to organize it again. It also showed me how gamification can help people learn without noticing and how powerful it could be in our industry and in others, if well used.

I’m looking for other opportunities to create such games and leverage the power of gamification.